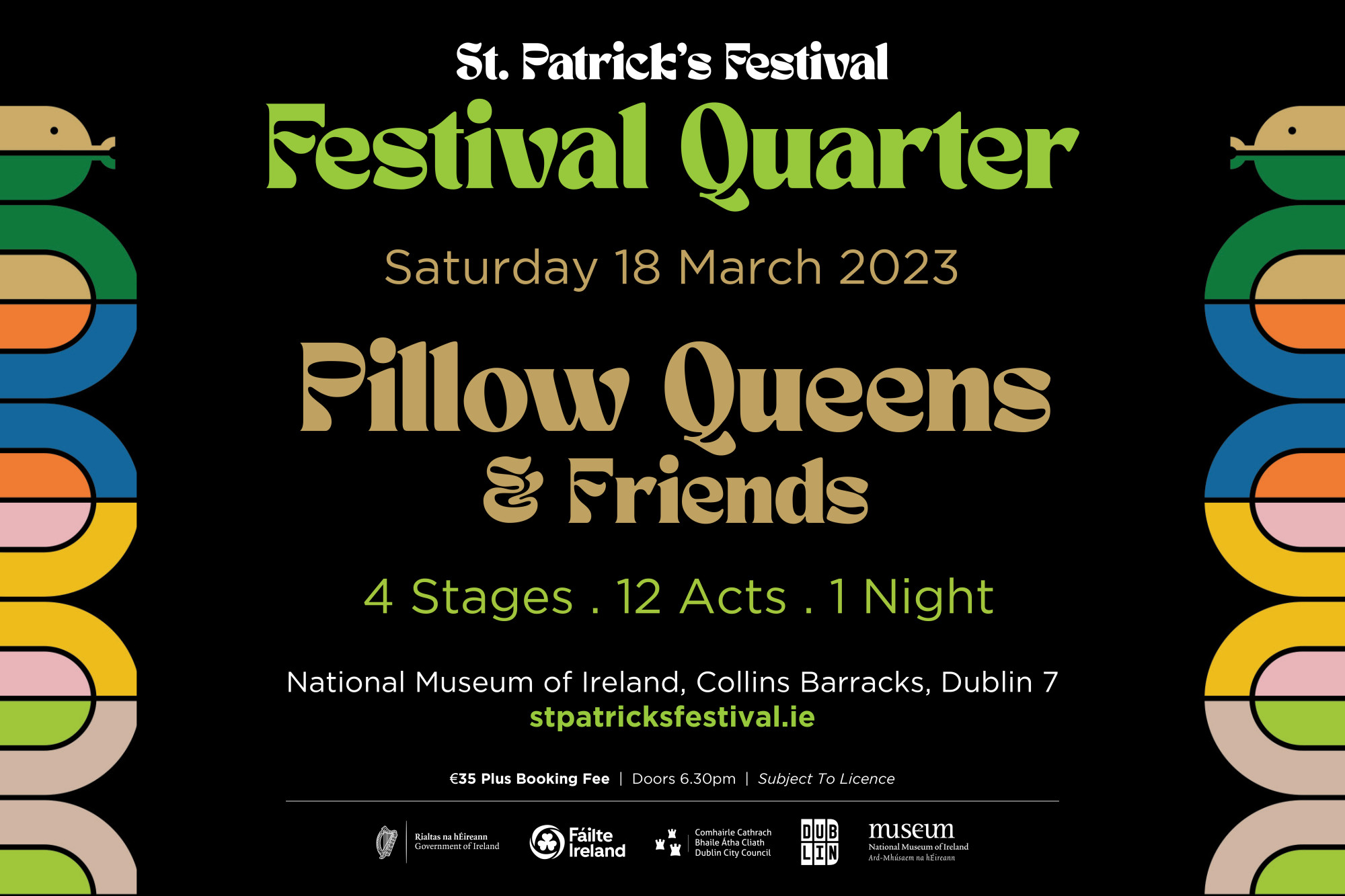 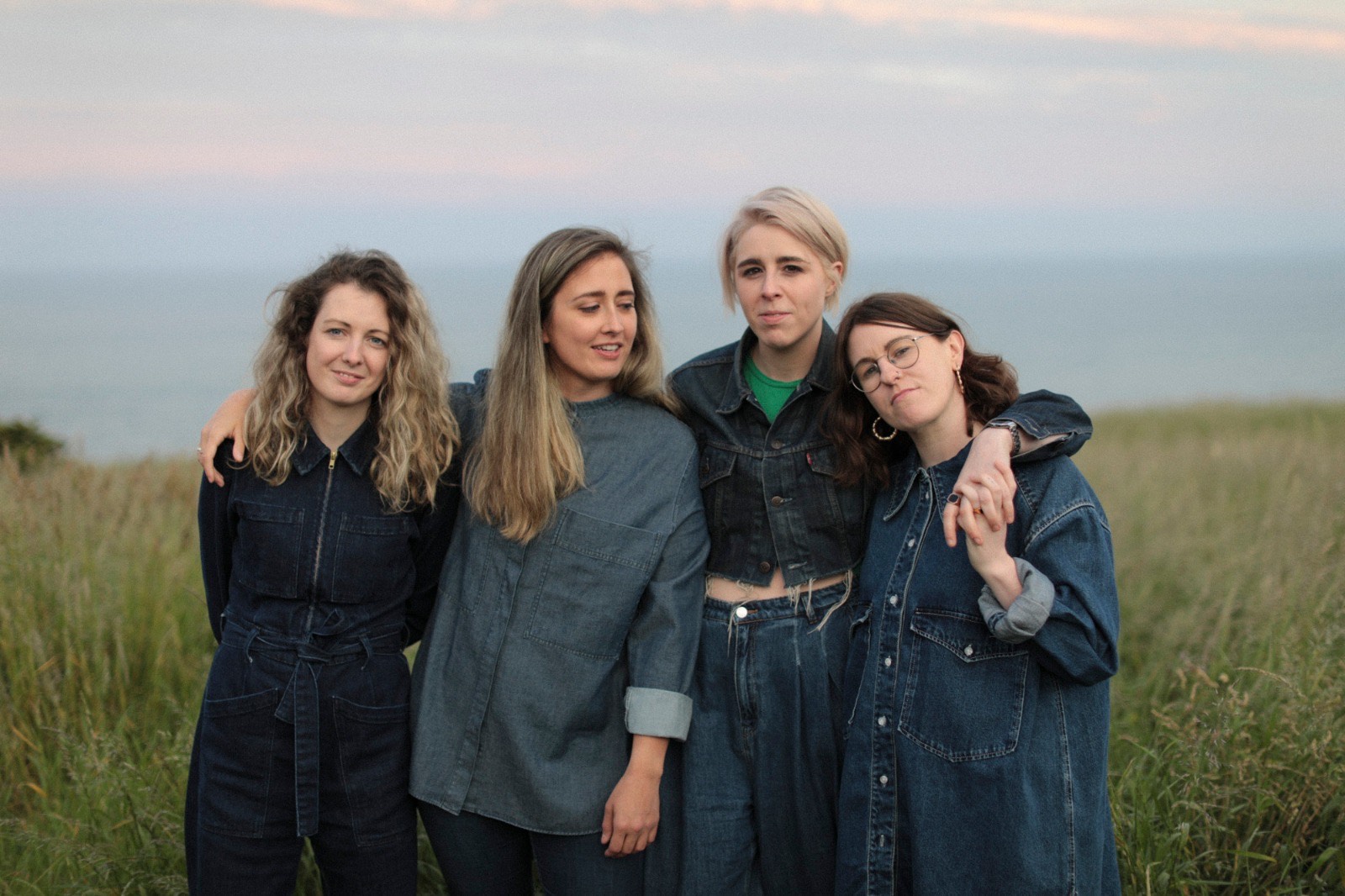 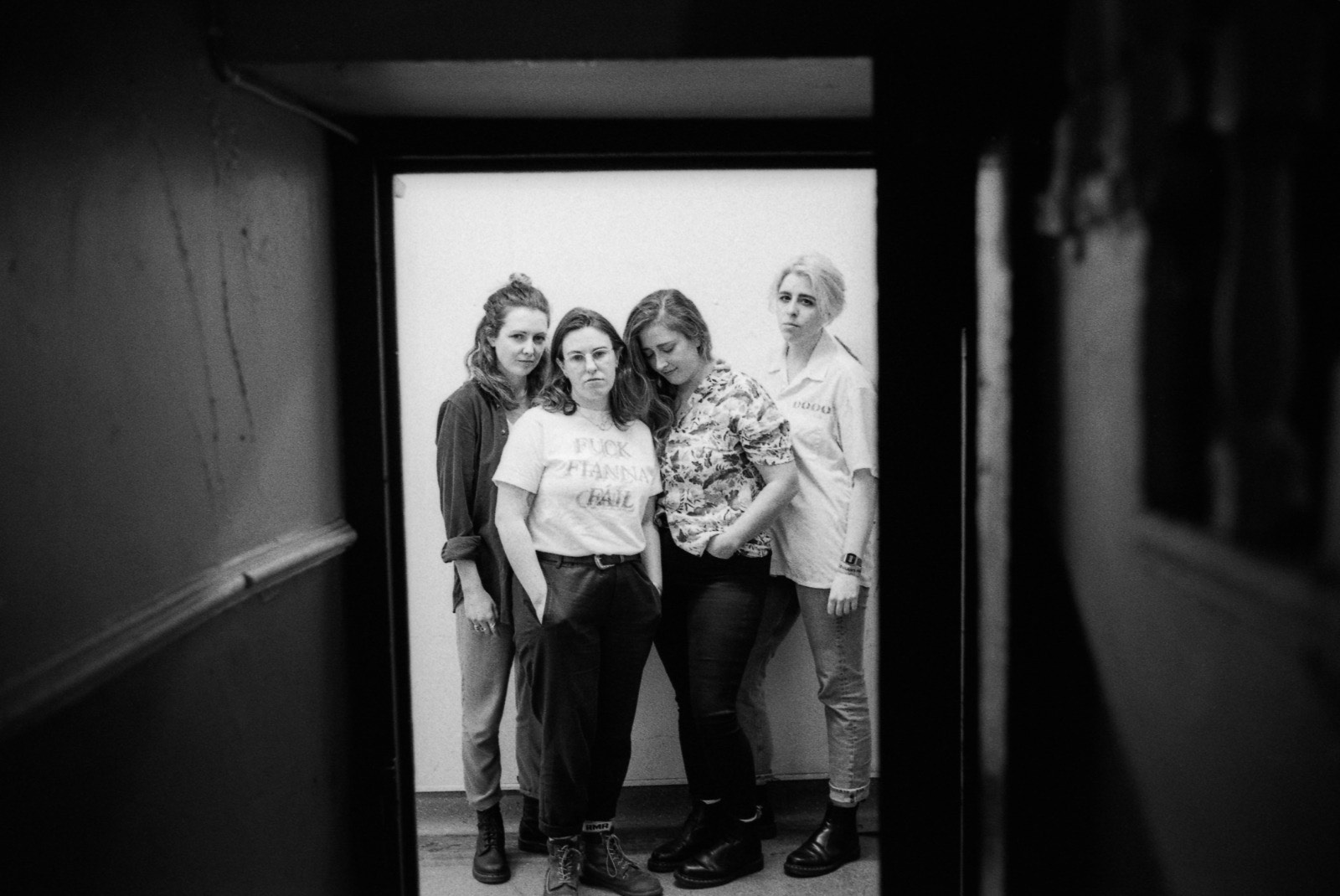 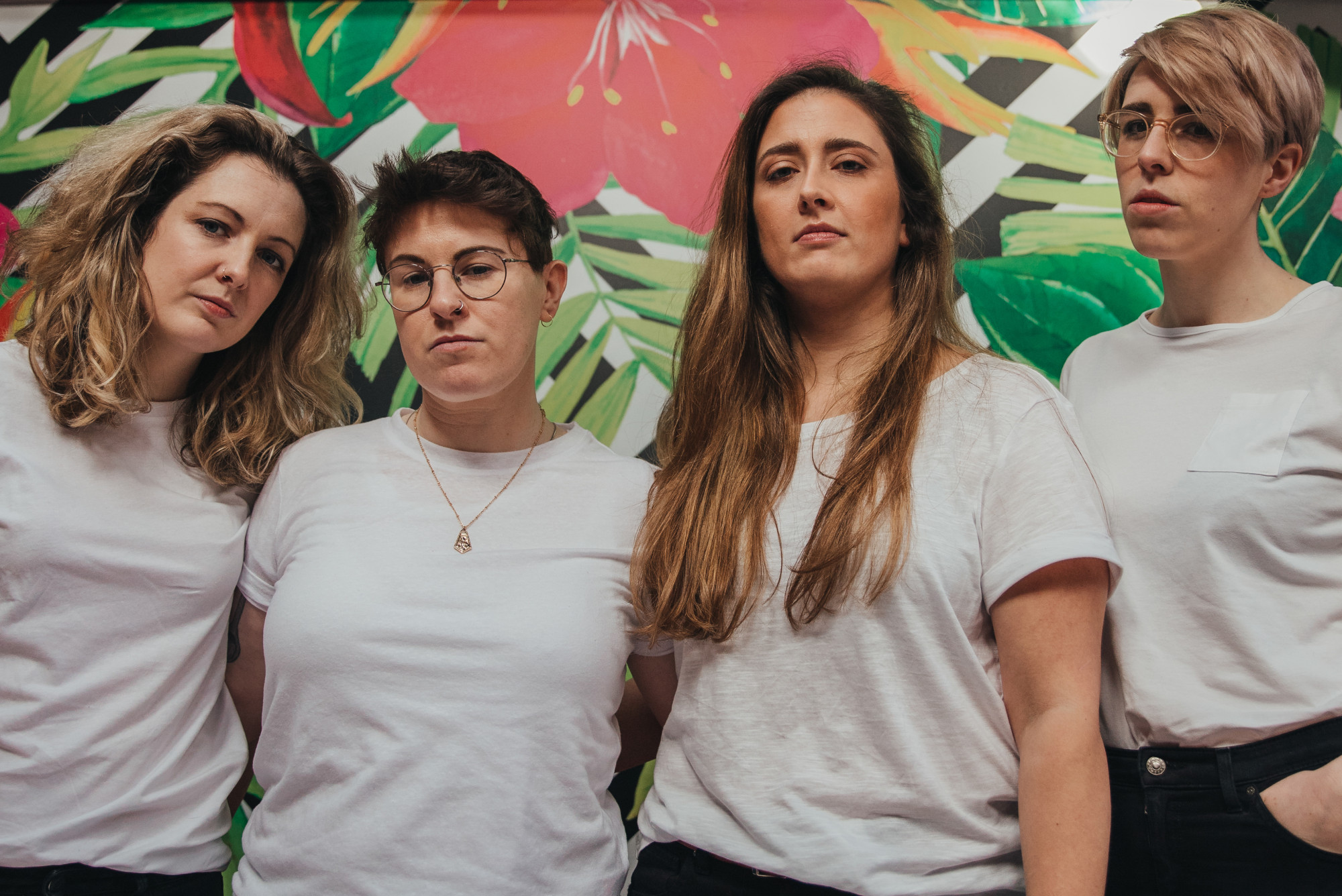 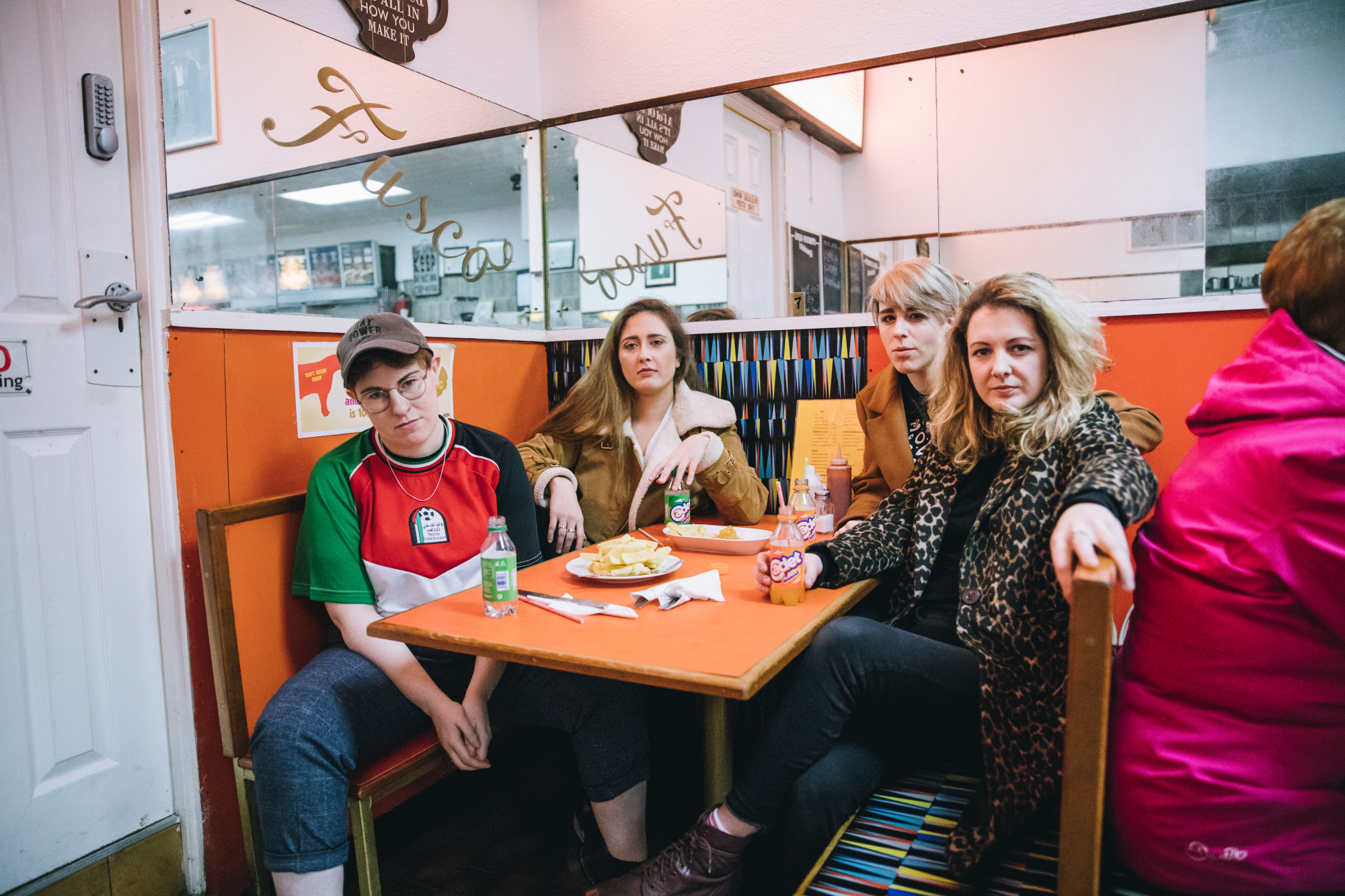 St. Patrick’s Festival is delighted to announce that Irish international sensations, Pillow Queens, will be taking over Festival Quarter at the National Museum of Ireland - Decorative Arts & History at Collins Barracks on Saturday 18th March 2023.In a unique collaboration, St. Patrick’s Festival have invited Pillow Queens to curate an evening that celebrates the best of new Irish music across four stages on the Festival Quarter site, before they take to the main stage and bring it home with a set that is sure to thrill audiences in a true celebration of Irish culture.

Marking the return of the hugely popular Festival Quarter in the National Museum of Ireland - Decorative Arts & History at Collins Barracks, the evening will see the iconic site transformed into a unique urban Festival from 6.30pm with 12 live music acts across 4 stages, live DJs, the best in Irish food and drinks, art installations, pop-up performances and much more.

Headliners and curators-in-chief on the night of Saturday 18th March are Dublin based 4-piece indie rock band Pillow Queens, comprising Pamela Connolly, Sarah Corcoran, Cathy McGuinness, and Rachel Lyons. Their first album, 2020’s ‘In Waiting’ was a phenomenal success, earning the band global praise and culminating in a US national television appearance on the Late Late Show with James Corden. In 2022, the band released their sophomore record ‘Leave The Light On’, played two sold out Vicar Street shows and performed to crowds of thousands across North America and Europe. With a wealth of knowledge of the music scene both in Ireland and abroad and as highly regarded tastemakers in the industry, Pillow Queens will lend their talents and expertise to curating the musical offerings at Festival Quarter on the night of Saturday 18th March 2023.

Of the return of Festival Quarter and the Pillow Queens announcement, Richard Tierney, St. Patrick’s Festival CEO said: “Festival Quarter at the National Museum of Ireland, Collins Barracks was a huge success last year, bringing thousands of locals and visitors alike together to celebrate and enjoy the best of Ireland's arts, culture and entertainment. I’m thrilled to announce today that not only will it return for St. Patrick’s Festival 2023, but also one of Ireland’s hottest international acts, Pillow Queens, will headline the main stage on the Saturday night of the Festival and curate the rest of the music line-up for the night. We’ll be revealing the full line-up in the coming months - it’s sure to be a highlight of the festival weekend, so get your tickets now before it’s too late.”

Speaking of their contribution to the Festival through curation and performance, Pillow Queens said; “We are so looking forward to playing this event not only because we get to play alongside some of our favourite Irish acts, but we get to do it in Collins Barracks, a location of such beauty and historic importance.”

Ciara Sugrue, Head of Festivals, Fáilte Ireland said “The Festival Quarter is a fantastic addition to St Patrick’s Festival and the celebration of our National Holiday. Unique festivals and events such as this play a key role in delivering brilliant visitor experiences and offer an exciting opportunity for visitors to fully immerse themselves in Ireland’s unique culture, heritage and history”.

Lynn Scarff, Director of the National Museum of Ireland adds: “National Museum of Ireland is delighted to once again partner with St. Patrick’s Festival and host the Festival Quarter. The 2022 event showcased the historic setting of the museum and its success highlighted how our cultural institutions can provide the backdrop to arts and cultural experiences. We look forward to welcoming Pillow Queens and all the acts to the site.”

Tickets are €35 (plus booking fee)

This event is subject to licence and is only suitible for over 18s only.

St. Patrick’s Festival is made possible through the continued support of the Government of Ireland, the Department of Tourism, Culture, Arts, Gaeltacht, Sport and Media, Fáilte Ireland, Dublin City Council, and many generous partners and funders.

If you would like further information,
please email info@stpatricksfestival.ie ​
or call us on 01 604 0090

Accept All Reject All Save